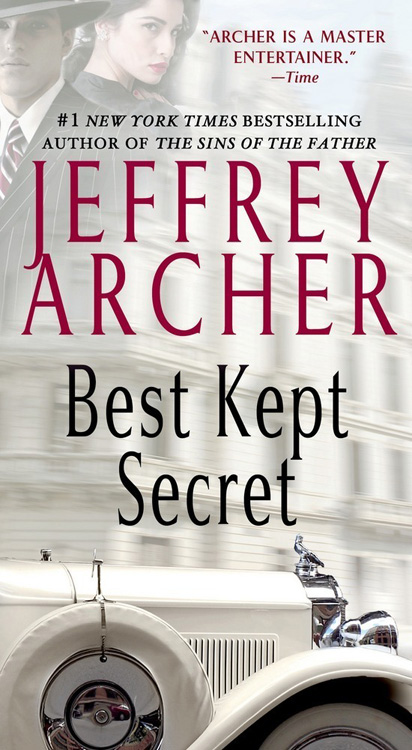 ‘THEREFORE IF ANY MAN can show any just cause why these two people may not lawfully be joined together in holy matrimony, let him now speak, or else hereafter for ever hold his peace.’

Harry Clifton would never forget the first time he’d heard those words, and how moments later his whole life had been thrown into turmoil. Old Jack, who like George Washington could never tell a lie, had revealed in a hastily called meeting in the vestry that it was possible that Emma Barrington, the woman Harry adored, and who was about to become his wife, might be his half-sister.

All hell had broken loose when Harry’s mother admitted that on one occasion, and only one, she had had sexual intercourse with Emma’s father, Hugo Barrington. Therefore, there was a possibility that he and Emma could be the offspring of the same father.

At the time of her dalliance with Hugo Barrington, Harry’s mother had been walking out with Arthur Clifton, a stevedore who worked at Barrington’s Shipyard. Despite the fact that Maisie had married Arthur soon afterwards, the priest refused to proceed with Harry and Emma’s wedding while there was a possibility it might contravene the church’s ancient laws on consanguinity.

Moments later, Emma’s father Hugo had slipped out of the back of the church, like a coward leaving the battlefield. Emma and her mother had travelled up to Scotland, while Harry, a desolate soul, remained at his college in Oxford, not knowing what to do next. Adolf Hitler had made that decision for him.

Harry left the university a few days later and exchanged his academic gown for an ordinary seaman’s uniform. But he had been serving on the high seas for less than a fortnight when a German torpedo had scuppered his vessel, and the name of Harry Clifton appeared on the list of those reported lost at sea.

‘Wilt thou take this woman to thy wedded wife, wilt thou keep thee only unto her, as long as you both shall live?’

It was not until after the end of hostilities, when Harry had returned from the battlefield scarred in glory, that he discovered Emma had given birth to their son, Sebastian Arthur Clifton. But Harry didn’t find out until he had fully recovered that Hugo Barrington had been killed in the most dreadful circumstances, and bequeathed the Barrington family another problem, every bit as devastating to Harry as not being allowed to marry the woman he loved.

Harry had never considered it at all significant that he was a few weeks older than Giles Barrington, Emma’s brother and his closest friend, until he learned that he could be first in line to inherit the family’s title, its vast estates, numerous possessions, and, to quote the will, all that therein is. He quickly made it clear that he had no interest in the Barrington inheritance, and was only too willing to forfeit any birthright that might be considered his, in favour of Giles. The Garter King of Arms seemed willing to go along with this arrangement, and all might have progressed in good faith, had Lord Preston, a Labour backbencher in the Upper House, not taken it upon himself to champion Harry’s claim to the title, without even consulting him.

‘It is a matter of principle,’ Lord Preston had explained to any lobby correspondents who questioned him.

‘Wilt thou have this man to thy wedded husband, to live together after God’s ordinance, in the holy estate of matrimony?’

Harry and Giles had remained inseparable friends throughout the entire episode, despite the fact that they were officially set against each other in the highest court in the land, as well as on the front pages of the national press.

Harry and Giles would both have rejoiced at the Lord Chancellor’s decision had Emma and Giles’s grandfather Lord Harvey been in his seat on the front bench to hear the ruling, but he never learned of his triumph. The nation remained divided by the outcome, while the two families were left to pick up the pieces.

The other consequence of the Lord Chancellor’s ruling was, as the press were quick to point out to their rapacious readers, that the highest court in the land had ordained that Harry and Emma were not of the same bloodline, and therefore he was free to invite her to be his lawfully wedded wife.

‘With this ring I thee wed, with my body I thee worship, and with all my worldly goods I thee endow.’

However, Harry and Emma both knew that a decision made by man did not prove beyond reasonable doubt that Hugo Barrington was not Harry’s father, and as practising Christians, it worried them that they might be breaking God’s law.

Their love for each other had not diminished in the face of all they had been through. If anything, it had grown stronger, and with the encouragement of her mother, Elizabeth, and the blessing of Harry’s mother Maisie, Emma accepted Harry’s proposal of marriage. It only saddened her that neither of her grandmothers had lived to attend the ceremony.

The nuptials did not take place in Oxford, as originally planned, with all the pomp and circumstance of a university wedding, and the inevitable glare of publicity that would accompany it, but at a simple, register office ceremony in Bristol, with only the family and a few close friends in attendance.

Perhaps the saddest decision that Harry and Emma reluctantly agreed on was that Sebastian Arthur Clifton would be their only child.